Three persons as a start? Of course not. The three names indicate one particular person. The woman who delivered me into this galaxy. 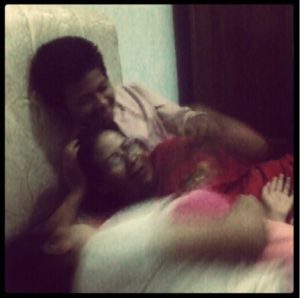 Let me start with the herstory of the name.

My mom was born in May 1954 or 1955. As Indonesian, I am sure this is not just my mom’s case. There are so many stories like what my mom has about baby boomers who were born in that era. Unregistered or falsely registered, until at some point they need the birth certificate or ID card, then the confusion started.

In her case, it was in the early 70’s when Beatles and Soneta Grup were hitting the road as the most popular bands, a very beautiful young lady named Jumilah was looking for a job. She’s just turning 16. Of course it’s really hard to find one in her age without proper education. So, her friend told her to change her identity to be somebody completely new and make it a year or two older, in order to get the job. And.. voila! To make the story short, the Jumilah person was suddenly disappeared from the orbit, and replaced by Maimonah or Maimuna (still confused of which one is more valid) who was born a year earlier.

And, guess what? She got the job! That’s just how it works.

So I remember it’s been a confusion for me as little girl to find out that our big family member called my mom with “La” as the abbreviation of Jumilah, while her friends from work called her “Mun” from Maimuna. And I just realized that my sister use the word “Moon” for our mother in her contact number. She’s nothing like a moon at all. She’s not circling around a planet full of selfish living creatures. She is a star. She has her own source of light.

What’s so special about her, so that she got the chance to be in the 1st list of this category? Not just because she is my mother, but also because she’s a very strong character.

As the 1st child of 7 siblings of an army member, she has no choice. My grandfather who I’ve never had a chance to meet in person moved a lot when he served the country. My grandmother who then got pregnant again and again like every year or two was too busy to take care of the kids and the house by herself. So my mom were often had to take the responsibility as the decision maker in the house. In the age of 13, she’s starting to make money by selling fried bananas all the way through the barracks. She was brave enough to say no to the married proposal from an old man when she was 14 or 15. Thank God she did.

I cannot imagine a teenager like her, has to fight against her own mother to say no and to be able to prove that she can help the family without marrying the old man. No one was on her side. Marriage considered as the solution to get away from the poverty at that time. And sadly it still is for some people in my country. And she was the only one who is brave enough to NOT buy the idea.

And she was right.

Don’t get me wrong, she doesn’t have any degree. She didn’t even finish her elementary school. But she managed to get the job in one of the major fabric company in Salatiga, she also manage to build her own restaurant back in 80s in Lampung, and raised her 4 well educated manner sweet kids. I’m bragging about that, I know. I’m not that well manner nor sweet, haha. But my mom has the biggest role for her kids’ education is something we cannot deny.

She’s not a good manager, but she is a total survivor. Even in the lowest point or our family situation, she always finds a way to survive. When the restaurant was closing down due to mismanagement, we survived. When my dad had strokes and heart attack couples of times, she’s turning into the 24/7 dedicated carer for him, and she did it with smile.

She is the most beautiful woman in the world. I remember when I was a little girl, she asked me to accompany her in a dance rehearsal and I was like, wow… she’s a real bambi. It was Tari Kijang (Dancing of the Deer). She’s so pretty. Can I ever be as pretty as her when I was in her age, that’s my question at that time. She was on her 20th, by the way.

I tried to copy whatever she did in the past, but it didn’t work well. I cannot dance, I cannot sing, I don’t cook, and I am never be as pretty as her. She will always be the most beautiful woman for me.

She is so fun to be with. She told me stories and sang in the middle of the stories, with Maduranese traditional song. The tittle of the story is Toron Pepek. I remember the story very well.

She talks to anything that makes her scared instead of screaming out loud and run, e.g. mouse, cats, unseen thingy, and other things like frying pans, knives, stoves, vegetables. I remember my dad thought that she’s with somebody else in the kitchen in the middle of the night, and he silently trying to listen to what they’re talking about. And this is what he heard: “Ah, if you don’t want to show yourself, fine. I will find you like it or not, anyway.” That’s with the knives or frying pans. Or, “Bad bad bad bad… I gave you food. You supposed to know that. But this one is not yours. This supposed to be for my grandkids. Show some respect to me.” You know exactly to whom she spoke, right? Yes, mouse or cat.

Easy to be loved

When I grow older and think that what I feel to my mom is very subjective, I finally can prove it wrong. My friends like my mom. They told her secret things like, when their 1st pubic hair grew… euh, their secret secret secret love stories, their family problems and many other secret things. And now I can see it even clearer. My nephews are always running and jump into my mom and hold her and kiss her like they’ve been parted for 10 years. They are 3 and 5 years old, by the way. Al kissed my mom’s face nonstop for his 1st hour arrived at his granny’s home. El started to do the same thing lately. And my mom gets along with her in law very well.

She is the only person who gets the privilege as the must pick up the phone in any condition for me. She is my ring #1. And I call her, Ibuk.

This site uses Akismet to reduce spam. Learn how your comment data is processed.

What to Read Next